Robot Wars, and the extreme fighting machines that competed in these thrilling battles.

First broadcast on British television back in 1998, Robot Wars was an extremely brutal competition between especially crafted remote-controlled robots.  The builders of these fighting machines were either pure amateurs or professional technicians.  The mainly metal, carefully constructed robots were pitted against each other in a series of battles that saw many amazing machines crash and burn.  The arena was made from steel and protected with bullet proof glass.  There were many extra obstacles and hazards the competing machines were pitted against, including large, house robots that were much bigger, stronger, and heavier than the competitors. These lean, mean fighting machines may well have been coated with HVOF, a High-velocity oxy-fuel coating which protects the outer surface and makes it significantly more resistant to damage. These specialised coatings can be obtained from companies such as http://www.poeton.co.uk/standard-treatments/plasma-coatings/ 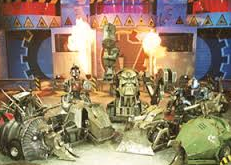 These House Robots were given names that made them seem even scarier than they looked, Sergeant Bash’s Flamethrower, Dead Metal and Sir Killalot to name just three. Robot Wars has been presented by Jeremy Clarkson, Craig Charles, Dara O’Brain and Angela Scanion from its origins in 1998 until the final series in 2018.  The very first Robot Wars programme was broadcast on BBC 2 on the 20th of February 1998 and was hosted by Jeremy Clarkson. The merchandise from this successful series, which included a mini arena, friction powered, and remote-controlled robots sold really well and was one of the most prominent items on the toy market in 2002. With an estimated audience of six million viewers at its peak in the late 1990’s it’s no surprise that the hit show became a worldwide sensation.

The rules of the battles were quite complicated and there were several ways a robot could be deemed to have lost.  Firstly, immobilisation, if your robot can’t move it’s out.  The infamous Pit, a deep, square hole somewhere inside the arena where if you were pushed into it by the House Robots, you were also eliminated. The contest was judged by an elite panel and if neither of the competitors was a clear winner then they would mark the robots on certain criteria, the amount of aggression shown, the damage caused, the ability to control the robot and style, the ability to right itself. In the fourth series of Robot Wars a “Refbot” was introduced and was used to count out defeated competitors and even deployed a fire extinguisher!